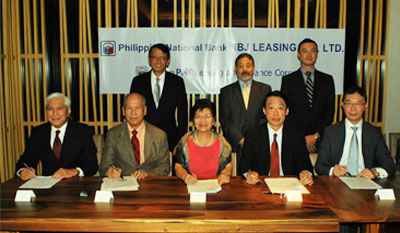 The Philippine National Bank’s leasing and financing subsidiary, Japan-PNB Leasing and Finance Corporation (JPNB) is further strengthening its foothold in the market by forging a stronger and expanded partnership with its long-time Japanese partner, IBJ Leasing Co., Ltd (IBJL), one of the biggest and leading leasing and financing companies in Japan. Senior Japanese officials of IBJL are in town to officially ink the terms of the new partnership between the Philippine and Japanese financial giants.

Under the terms of the new and expanded partnership, IBJL has increased its stake in JPNB from 10% percent to 25% percent, acquiring the additional holdings from PNB which now has a 75% stake in the leasing company. As a result of the increase of equity share, JPNB will now become an affiliate company of IBJL further cementing its strategic role as the local representative of one of the biggest Japanese leasing companies, and consequently, a gateway into a diversified array of new business opportunities.

The move is seen both as a validation of renewed confidence in the Philippines as an investment destination and in PNB’s stature as the country’s leading financial institution. According to IBJL officials, the decision to expand its stake in JPNB is part of a larger strategy to effectively respond to the pronounced need of major Japanese retailers and auto makers to seize opportunities in the fast growing Philippine consumer market. The financial muscle of IBJL and its extensive network of Japanese businesses is expected to complement PNB’s strong brand heritage as the country’s preeminent financial institution as evidenced by its almost 100 years of leadership in the industry as the country’s national bank with the largest global footprint.

The new partnership will usher in the change of the commercial name of JPNB to PNB-IBJL Leasing and Finance Corporation by next year subject to the appropriate approval of the regulators. These dynamic changes are but the opening salvo of the company’s drive to increase its market share, which has grown considerably in the last four years.

Japan-PNB Leasing and Finance Corporation was established in January 1998 as a joint venture with PNB to meet the financial requirements of advancing Japanese firms and local businesses including PNB’s clients. In the last 16 years, the company has consistently maintained its upward trajectory drawing strength from its variety of products and services that range from financial leases, operating leases, loans, and receivables discounting facilities.