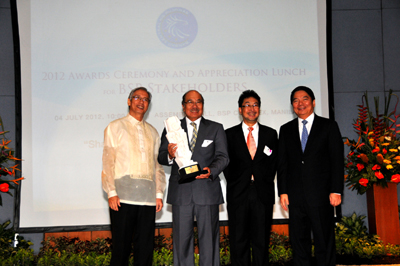 
The Bangko Sentral ng Pilipinas (BSP) recently gave recognition to Philippine National Bank (PNB) as the Top Commercial Bank in Generating Remittances from Overseas Filipinos. The award was given during the 2012 Awards Ceremony and Appreciation Lunch for BSP Stakeholders held at the BSP Assembly Hall, BSP Complex, Manila.

Philippine National Bank is one of the largest commercial banks in the country with a very strong franchise in the remittance business. To date, it remains to have the biggest and most expansive international network among local banks with its 97 branches, offices, remittance centers and subsidiaries covering Europe, the Americas, Middle East, Canada and the Asia Pacific.

PNB was already elevated by BSP as Hall of Fame Awardee having been awarded as Best Commercial Bank Respondent on Overseas Filipino Remittances for three straight years. In 2009, the Bank was likewise conferred the Global Excellence Award as the Most Outstanding Remittance Bank by the Asia-Pacific Awards Council.